A week ago I saw the Laika animation 'Kubo and the two strings'. Being a Laika fan, knowing how original their plot lines are, I had high hopes for this film. That being said, I am also one of those people that gets very affected by what people tell me before I see a show. So naturally when the story line was described as being super original, I was greatly disappointed to have guessed the entire plot before it unfolded before me. That doesn't mean I didn't enjoy it. It was entertaining and SO beautiful to watch. I have seen other Laika animations that have seemed more original with the story than this was though. One of my all time favorite shows will always be 'Paranorman'. Coraline and Boxtrolls were pretty great too. Visually though, 'Kubo' definitely delivered and I couldn't have asked for more. Especially the scenes with the Sisters, which is why I had to create a little fan art: 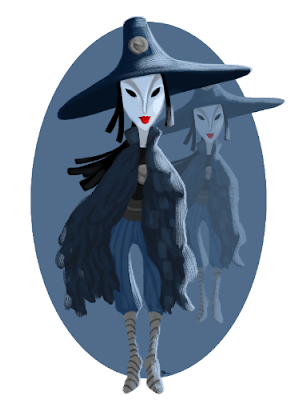